A Unique Solution for the Barents Sea

CGG intends to acquire a 5,000 km² multi-client 3D survey with TGS in the Barents Sea in the summer of 2019. This survey will be acquired and processed using CGG's TopSeis acquisition and imaging technology.

TopSeis is a tailored solution, specifically designed to improve imaging of shallow and intermediate-depth targets by overcoming the lack of recorded data close to the source (near-offset data) inherent in towed-streamer seismic. TopSeis achieves this by placing the source in the centre of the receiver array. This requires the receivers to be towed far deeper than in conventional surveys and the use of two vessels to acquire the data. 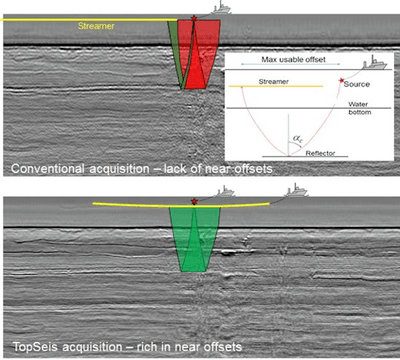 Based on ideas and continuous support from Lundin, TopSeis was developed over four years by a multi-disciplinary team of CGG and Sercel Equipment, Marine Acquisition and Geoscience experts, using synthetic data and field trials to derive optimum configurations for specific targets and to develop methods to deploy these configurations safely.

It capitalizes on CGG’s long-standing broadband capabilities, including deep-tow experience from acquiring over 500,000 km² of broadband seismic and our recognized subsurface imaging excellence.

The only alternative to this approach is to place receivers on the seabed which is many times more expensive.

The Barents Sea really benefits from this technology because the main reservoir rocks are high-velocity karstified Permian carbonates located at depths varying between 400 to 1600 m below the seabed. The high velocity increase relative to the overlying Triassic sediments so close to the surface means a conventional 3D seismic survey is not optimal to record the narrow cone of reflected energy returning from the reservoir and the resulting seismic data suffers from limited resolution, poor data coverage and signal-to-noise as well as proving more difficult to demultiple – a particular challenge in the Barents Sea due to its hard, iceberg-scoured seabed pockmarked by gas leaking to the surface from the deeper rocks.