How I discovered my amazing future in civil engineering

My name is Imogen and I’m about to start my second year at the University of Bristol studying Civil Engineering. I have a very full university timetable with plenty of contact hours, but when I’m not working, I spend my time dancing or socialising.

Thriving on STEM subjects at school

I went to an all-girls school where we were given plenty of encouragement to study sciences. In year 11, when I chose my A-levels, I was grateful to leave behind modern languages and essay-based subjects in favour of maths, further maths, physics and chemistry. These are the subjects I am best at and enjoy the most. I didn’t know what I wanted to do with my life, but I did know I wanted to go to university.

Following my heart into engineering

Being at a girls’ school from age 11, I had no idea of the gender imbalance in STEM subjects. I’m grateful, with many female STEM teachers to look up to throughout the years, that I was shielded from it. In my sixth form year group only three girls out of 70 did the same A-level options as me. Studying one or two sciences or maths was common, but for physics there were only four of us. We stuck together and encouraged and pushed each other to work hard. During the lower sixth I started thinking about what I wanted to study at university. I knew I didn’t want to study a pure science. I really enjoyed mechanics in my math and physics, and this led me to engineering, but which discipline?

Not really understanding what engineering is, or what engineers do, I thought a good place to start was getting some work experience. Over the summer after lower sixth, I organised three weeks of experience, with a firm of architects, a chemical engineering company and within the Structural Engineering team at Atkins, a member of the SNC-Lavalin Group.

Inspired by learning on the job at Atkins

Welcomed back and valued

In the first year of my degree we studied maths, structural analysis, fluids, material properties, field methods, design and computing modules. With the 16-week long university summer holidays, I wanted to try to get a relevant job. I applied to Atkins through their website, had an interview and was thrilled to be offered a paid placement for 10 weeks, back with the London Structures team.

The bulk of my placement was spent working on a new passenger terminal building, with a large curved wooden roof, the profile of which is made from two hyperbolic curves and spans over 93 meters between supports. I spent time computer modelling and did calculations for the sizes of beams and columns. After only one year of university I felt I didn’t know a lot, but my supervisors didn’t expect me to do work that I would learn in future years and were always available whenever I had questions. The rest of my time I worked on the nearly completed Crossrail Farringdon Station and other small projects. There were many other placement students in the London office, and I enjoyed both organised and impromptu socialising with them and my department colleagues. The proudest moment of my placement was when the report for our passenger terminal was being finalised. With the approaching deadline we were all working late, and I really felt part of the team.

Loving the experience and passing it on

Most weeks during the school summer holiday I was mentoring 16-17-year old’s, who were in the same position that I was in two years earlier, showing them my work, helping them with their tasks and engaging in conversations about studying engineering. I hope I was able to enthuse them about going into careers in STEM and, in particular, Civil Engineering.

The experience I have gained this summer was invaluable and I hope to join the Atkins Structures team again next summer.

How will work experience benefit you?

Voices from our next generation: At the cutting edge of the environment

Day in the Life of a Bangalore Graduate Secondee

Grad Projects: An Inspiring Last Year on Our Graduate Programme
Read more of our blogs »
Download it and follow us.
You'll be the first to know.

"When I was at uni I dreamt about working on High Speed 2 (HS2) and it came true at Atkins."

"It’s amazing to have others around me who are sharing the same experience."
Meet more of our employees » 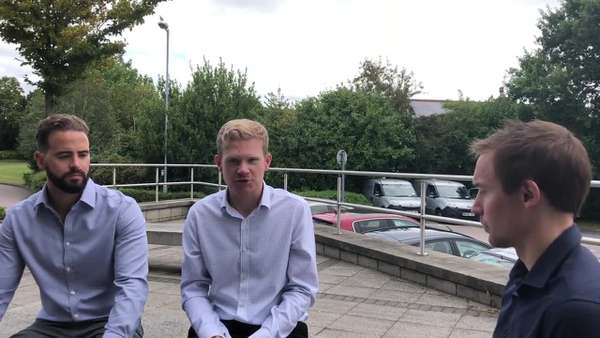 Rewards & Benefits
LATEST
A JOB YOU LOVE TO TALK ABOUT Sky has 9 roles based in Osterley, Brentwood or Leeds - closing April 30th. Apply today LOOKING FOR A PLACEMENT WITH A DIFFERENCE? CGI has news. They're looking for a technical intern to complete a 12 month placement BRAND NEW Tata Steel has 12 new roles live on their Hub - be part of the team and make a difference CLOSING APRIL 5th Balfour Beatty - health & safety advisor graduate (South East) accepting 2:2 and above ARE YOU READY TO TAKE ON A NEW CHALLENGE? Admiral is looking for a pricing analyst (travel insurance team) - accepting 2:1 and above in any STEM discipline 12 MONTH INTERNSHIPS Abaco Systems is looking for interns to join them for a duration of 12 months WANT TO BE A JAVA DEVELOPER? mthree is offering STEM graduates 12 weeks of online training £45K STARTING SALARY TPP offers an outstanding £45,000 starting salary to its graduates - check out the roles on offer
Get discipline relevant job alerts