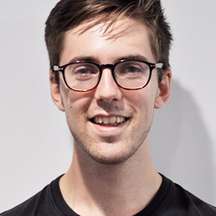 "Kier is a huge company, as are many of the big players in the construction world, and the opportunities for employees are massive."

There’s never been a better time to consider a role in the built environment there are so many opportunities and exciting things happening in the sector that it really is the right time to consider it as a career option.

We had various careers talks at school, where we were told to consider careers in teaching, finance and medicine. Before joining Newquay Tretherras Sixth Form in year 12 I have no recollection of ever being told to consider a career in the construction industry.

I had never really thought about what to do when I finished school, and this made it difficult to make decisions on what A-level subjects to do. I was first introduced to Kier and I started to consider the built environment as a potential career option.

Employees from Kier visited our class to tell us about the company, as well as their different career roles. As part of our studies they set us a marketing challenge where we would need to market a Kier project that aims to promote the construction industry in schools.

As part of it we went to Newquay Junior Academy to meet with primary school children, with an aim to understand the primary curriculum, and how to design the scheme to fulfil educational benefit. When we were there we also spoke to them about the construction industry – something that had never been discussed with them before.

We then had to present our suggested scheme to various members of Kier, this needed to include our campaign ideas, cost implications and the reasoning behind our ideas. Working on a project set by a huge company was really interesting. The Kier team put a lot of effort and thought into the task, which gave me a really positive opinion of the company, and the built environment as a whole.

Our team won the competition, and then went on to present the scheme to various Kier directors for them to consider the ideas for ‘Adopt-A-School’. They really liked our ideas, and said they would look into implementing them as part of the campaign, I felt really proud that such a big company liked our ideas and wanted to look at executing them.

As positive as the project was, the campaign really opened my eyes to the skills shortage facing the industry, and the very real threat it poses to the sector, something I wasn’t aware of previously.

One of the most beneficial and eye-opening parts of the project was to speak to people from Kier about the company and their roles. It was exciting to hear about how different their jobs were, the projects they are involved in, and to hear first-hand about their day-to-day roles and experiences, it was from these conversations that I started considering working in the built environment.

When I decided to do a placement year I kept thinking about Kier as a company, and how much I had enjoyed doing the project for them. I got in touch with one of the team who had orchestrated our A-level project, and asked if there was an opportunity to do a year-long marcomms placement at Kier. I was thrilled when she told me there was an opportunity opening up, and after the interview process I was offered the role and was told I would be based in the head office in Bedfordshire. There aren’t many opportunities to work for a big corporate company in Cornwall, and being given the opportunity to do that has been very exciting to me.

I have just started, and so far I am really enjoying it. I can already tell I will be learning a lot in the next year, and it will be really beneficial to my career going forward. Kier is a huge company, as are many of the big players in the construction world, and the opportunities for employees are massive. I genuinely believe there is a job role to interest everyone, if only they were made aware of the opportunities available.

"The encouragement, support and opportunities presented has meant that several senior..."

"My supervisor was a great mentor and within nine months I was able to personally manage..."

"I feel privileged to have been involved with such a large, well-managed project, and..."

"The project I'm working on at the moment means the face of London infrastructure will..."
Meet more of our employees »
Download it and follow us.
You'll be the first to know.
The Gradcracker Alert Service will email you with any new opportunities from this company. You can manage your list of followed companies on your Gradcracker Dashboard.
LATEST
GRADCRACKER VISITS CERN Gradcracker has been invited to visit CERN in Switzerland – find out how you can get involved BRAND NEW Royal Society of Chemistry undergraduate research bursary scheme - £305.20 per week GRADCRACKER CAREER CENTRE find out why a CV and cover letter is an important part of your application EXPLORE OUR 200+ EMPLOYERS find out more about each of our employers on the A-Z search 12 MONTH PLACEMENTS build the career that you want at Caterpillar - accepting 2:2 and above - apply today SOFTWARE DEVELOPER TPP has internship & graduate opportunities in software development - open to all STEM disciplines - don't miss out