Added: Over a year ago by Rolls-Royce

Rolls-Royce brings together ‘the most elite band of geeks this side of the galaxy’ to help change the lives of those with extreme disabilities. 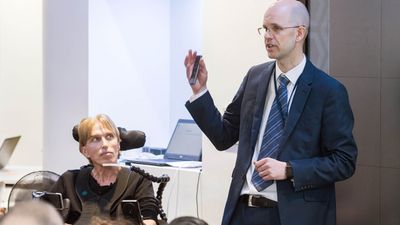 An Artificial Intelligence specialist, a software engineer, a ship navigator and a nurse: just some of the world-leading experts who travelled to Rolls-Royce’s Innovation Lab in Derby, UK last week. Greeted by Stuart Moss, an IT innovation strategist, and Dr Peter Scott-Morgan, a scientist living with Motor Neurone Disease, they were given their agenda for the day: to change the world.

This was the Motor Neurone Disease Association’s Next Generation Summit, or a meeting of ‘the most elite band of geeks this side of the galaxy’, as Dr Scott-Morgan called them.

Hailing from some of the world’s most famous companies, including Accenture, CapGemini, Cisco, Intel, Microsoft, the NHS, and Rolls-Royce, it was an unlikely gathering of individuals, each with a unique set of skills.

Two months ago, the group received an invitation from Stuart, asking if they would come together for an exploratory meeting, to discuss how they could use state-of-the-art technologies to help people with extreme disabilities to thrive.

In the summer of 2013, Stuart’s father Brian was playing golf with friends. When he took his swing on the first tee, his golf club ended up flying 20 yards – he’d lost his grip. The same thing happened twice more during the round of 18 holes.

A few weeks later, he collapsed in the garden at home. Two weeks after that, Brian was diagnosed with Motor Neurone disease (MND), and by Christmas he couldn’t walk. Sadly, Brian died the following Christmas.

“When my Dad was diagnosed, all I could think was – we have to innovate our way out of this. We have to come up with something to solve this,” said Stuart.

Stuart contacted the Motor Neurone Disease Association, and was introduced to Dr Peter Scott-Morgan, a scientist living with the disease, who has devoted his time to coming up with a solution for people with extreme disabilities to thrive. Dr Morgan was working with a group of small companies, but Stuart was convinced he could bring together industry leaders, some of the best brains in the world, to find a solution.

Fast forward to March, and the group were animatedly discussing how they could help people with extreme disabilities communicate, move, retain their personality, and interact with the physical world.

“I want to redefine what it means to have an extreme disability,” said Dr Morgan. “Using technology, I want people to live a life even better than they had before. I’m convinced we can achieve it.”