Added: Over a year ago by Unilever

Unilever has regained its top position in the annual list of Britain’s Most Admired Companies (BMAC) 2017. 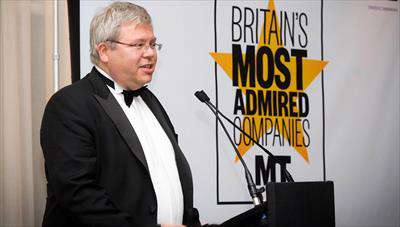 This year’s recognition makes Unilever the only company to have been in the top 20 every year since the award was first introduced in 1990, with Management Today describing the business as the ‘brightest star’ in their Most Admired firmament. Having also come top in 2015 and 2010, Unilever is one of just a handful of other companies to have won the coveted award more than twice. In addition to receiving the BMAC award, Unilever also once again won the Food Producers category as well as the Quality of Marketing and Community & Environmental Responsibility categories.

Commenting on the win, Sebastian Munden, General Manager for Unilever UK and Ireland said: “We are delighted to have been named Britain's Most Admired Company for 2017. We are proud of our commitment to growing our business whilst doing the right thing for the world we live in, and it is fantastic to be recognised in this way for the work that we do across all of our brands and our business more broadly. I know it will mean a great deal to everyone who works at Unilever."

The Britain’s Most Admired awards provides an insight into the corporate reputation of the UK’s top businesses. Conducted by the Leeds Business School and published annually by Management Today, companies are marked out of 10 by their peers across 12 measures of success.

90 years of doing good – why companies with purpose last

A nose for business