Toyota's decision to establish a manufacturing operation in the UK was announced in 1989 and Toyota Motor Manufacturing (UK) was established in December that year.

Amal - Kaizen - it's all about continuous improvement

The first car, a Carina E, drove off the Burnaston production line on 16 December 1992. This was subsequently replaced by the Avensis in 1997 which saw three generations throughout its history. In July of this year, however, we bid a fond farewell to the 1,936,572nd Toyota Avensis – the final one to drive off our production line. We are proud to have been the home to the Avensis for over 20 years.

In 1998, the Corolla was introduced, which paved the way for the launch of the new generation Corolla in 2001. Then, in 2007, production of Auris, the new Toyota hatchback, replaced Corolla. Production of Auris Hybrid, the first full mass-produced hybrid in Europe followed in 2010 and Auris Touring Sport in 2013.

The time has come to make way for a new generation of car. Toyota is the leading company for hybrid vehicle development, and the new Corolla with its Touring Sports variant is the future of TMUK – the first model to introduce Toyota’s dual hybrid strategy replaced the Auris when it started to roll off our production lines in January 2019.

The processes at Burnaston include stamping, welding, painting, plastic mouldings and assembly and at Deeside machining, assembly and aluminium casting.

Toyota's origins lie in the Japanese weaving industry when Sakichi Toyoda invented the world's first automatic loom and, subsequently, set up the Toyoda Spinning and Weaving Company in 1918. His invention reduced defects and increased yields since a loom stopped and would not go on producing imperfect fabric and using up thread after a problem occurred. This principle of designing equipment to stop automatically and call attention to problems immediately (jidoka) remains crucial to the Toyota Production System today.

We are a member of the Gradcracker Five-Year Club

We have been a Gradcracker advertiser for at least five years. We recruit regularly and should still be doing so whenever it is time for you to apply for placements or graduate positions - make sure that you Follow us to be alerted to any of our new opportunities. 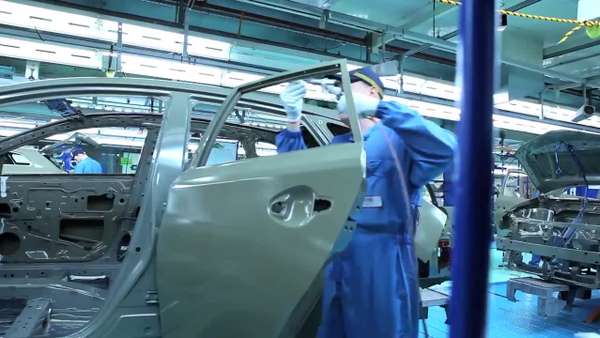 A Gradcracker advertiser for over 5 years - ideal for you to Follow!

Member No: 191
Toyota is the leading company for hybrid vehicle development, and the new Corolla with its Touring Sports variant is the future of TMUK.
Toyota's decision to establish a manufacturing operation in the UK was announced in 1989.
The first car, a Carina E, drove off the Burnaston production line on 16 December 1992.
In 1998, the Corolla was introduced, which paved the way for the launch of the new generation Corolla in 2001.
There are two manufacturing plants in the UK, representing an investment of £2.75 billion and employing approximately 3,000 members.
We're on the Gradcracker App.
The App. Get it.

We've signed the
Gradcracker Feedback Pledge
(This means that we will supply feedback if requested after an interview.)
Over 3,300 students have Followed us on Gradcracker.
Follow
LATEST
JOIN ARQIVA you will get the opportunity to add value and really quickly make a difference - apply to their placements and graduate roles today CHIVAS BROTHERS develop you career and join them as an Operations Graduate - closing January 15th 2023 STRUCTURAL ENGINEER Apply to Modulus a small chartered structural engineering and design consultancy NEW EMPLOYER! Aetha Consulting join as a Business Analyst for a Summer Internship or Graduate role - multiple vacancies JOIN CAMBRIDGE DESIGN PARTNERSHIP Careers at CDP are like no other - apply to their graduate roles today! BRAND NEW EMPLOYER Join one of world’s largest insurance brokerage, risk management and consulting firms Gallagher NEW EMPLOYER Join William Grant & Sons where you will be empowered to excel in your role. JOIN WATES They have degree apprenticeships, placements and graduate roles - apply now NEW SOCIETY HUBS Salford Formula Student Team and Queen Mary University of London Genetics Society
Follow your favourite employers
Save jobs to your shortlist
Receive personalised alerts
Access our live webinars
Register now
Get relevant job alerts
Gradcracker and Cookies
We use cookies to ensure that we give you the best experience on our website.
If you continue we'll assume that you are happy to receive all cookies from Gradcracker.
Continue
Learn more