LHC experiments are stepping up their data processing game

Analysing as many as one billion proton collisions per second or tens of thousands of very complex lead collisions is not an easy job for a traditional computer farm. With the latest upgrades of the LHC experiments due to come into action next year, their demand for data processing potential has significantly increased. As their new computational challenges might not be met using traditional central processing units (CPUs), the four large experiments are adopting graphics processing units (GPUs). GPUs are highly efficient processors, specialised in image processing, and were originally designed to accelerate the rendering of three-dimensional computer graphics. Their use has been studied in the past couple of years by the LHC experiments, the Worldwide LHC Computing Grid (WLCG) and CERN openlab. Increasing the use of GPUs in high-energy physics will improve not only the quality and size of the computing infrastructure, but also the overall energy efficiency.

“The LHC’s ambitious upgrade programme poses a range of exciting computing challenges; GPUs can play an important role in supporting machine-learning approaches to tackling many of these,” says Enrica Porcari, Head of the CERN IT department. “Since 2020, the CERN IT department has provided access to GPU platforms in the data centre, which have proven popular for a range of applications. On top of this, CERN openlab is carrying out important investigations into the use of GPUs for machine learning through collaborative R&D projects with industry and the Scientific Computing Collaborations group is working to help port – and optimise – key code from the experiments.”

ALICE has pioneered the use of GPUs in its high-level trigger online computer farm (HLT) since 2010 and is the only experiment using them to such a large extent to date. The newly upgraded ALICE detector has more than 12 billion electronic sensor elements that are read out continuously, creating a data stream of more than 3.5 terabytes per second. After first-level data processing, there remains a stream of up to 600 gigabytes per second. These data are analysed online on a high-performance computer farm, implementing 250 nodes, each equipped with eight GPUs and two 32-core CPUs. Most of the software that assembles individual particle detector signals into particle trajectories (event reconstruction) has been adapted to work on GPUs. 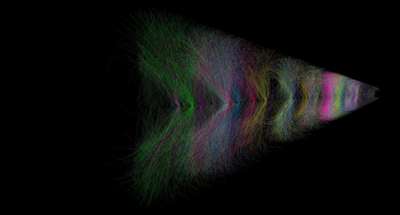 In particular, the GPU-based online reconstruction and compression of the data from the Time Projection Chamber, which is the largest contributor to the data size, allows ALICE to further reduce the rate to a maximum of 100 gigabytes per second before writing the data to the disk. Without GPUs, about eight times as many servers of the same type and other resources would be required to handle the online processing of lead collision data at a 50 kHz interaction rate.

ALICE successfully employed online reconstruction on GPUs during the LHC pilot beam data taking at the end of October 2021. When there is no beam in the LHC, the online computer farm is used for offline reconstruction. In order to leverage the full potential of the GPUs, the full ALICE reconstruction software has been implemented with GPU support, and more than 80% of the reconstruction workload will be able to run on the GPUs.

From 2013 onwards, LHCb researchers carried out R&D work into the use of parallel computing architectures, most notably GPUs, to replace parts of the processing that would traditionally happen on CPUs. This work culminated in the Allen project, a complete first-level real-time processing implemented entirely on GPUs, which is able to deal with LHCb’s data rate using only around 200 GPU cards. Allen allows LHCb to find charged particle trajectories from the very beginning of the real-time processing, which are used to reduce the data rate by a factor of 30–60 before the detector is aligned and calibrated and a more complete CPU-based full detector reconstruction is executed. Such a compact system also leads to substantial energy efficiency savings.

Starting in 2022, the LHCb experiment will process 4 terabytes of data per second in real time, selecting 10 gigabytes of the most interesting LHC collisions each second for physics analysis. LHCb’s unique approach is that instead of offloading work, it will analyse the full 30 million particle-bunch crossings per second on GPUs.

Together with improvements to its CPU processing, LHCb has also gained almost a factor of 20 in the energy efficiency of its detector reconstruction since 2018. LHCb researchers are now looking forward to commissioning this new system with the first data of 2022, and building on it to enable the full physics potential of the upgraded LHCb detector to be realised.

CMS reconstructed LHC collision data with GPUs for the first time during the LHC pilot beams in October last year. During the first two runs of the LHC, the CMS HLT ran on a traditional computer farm comprising over 30 000 CPU cores. However, as the studies for the Phase 2 upgrade of CMS have shown, the use of GPUs will be instrumental in keeping the cost, size and power consumption of the HLT farm under control at higher LHC luminosity. And in order to gain experience with a heterogeneous farm and the use of GPUs in a production environment, CMS will equip the whole HLT with GPUs from the start of Run 3: the new farm will be comprised of a total of 25 600 CPU cores and 400 GPUs.

ATLAS is engaged in a variety of R&D projects towards the use of GPUs both in the online trigger system and more broadly in the experiment. GPUs are already used in many analyses; they are particularly useful for machine learning applications where training can be done much more quickly. Outside of machine learning, ATLAS R&D efforts have focused on improving the software infrastructure in order to be able to make use of GPUs or other more exotic processors that might become available in a few years. A few complete applications, including a fast calorimeter simulation, also now run on GPUs, which will provide the key examples with which to test the infrastructure improvements.

“All these developments are occurring against a backdrop of unprecedented evolution and diversification of computing hardware. The skills and techniques developed by CERN researchers while learning how to best utilise GPUs are the perfect platform from which to master the architectures of tomorrow and use them to maximise the physics potential of current and future experiments,” says Vladimir Gligorov, who leads LHCb’s Real Time Analysis project. The jobs behind the science The High-Luminosity LHC
LATEST
BRAND NEW EMPLOYER Advanced Vision Technology is looking for Electronic and Software Engineers to join their team THREE GRADUATE OPPORTUNITIES Join RSSB and you could significantly impact the rail industry in numerous ways. JUST GONE LIVE Two graduate opportunities for Ricardo a global strategic engineering and environmental consultancy JUL/AUG/SEPT START DATES Couchbase are looking for graduate software engineers to join their team in Manchester NEW EMPLOYER Lilac Energy is a specialist supplier of software systems apply to one of their two graduate positions RADIUS SYSTEMS Join them as a Process Development Engineer on a Year-long placement
Follow your favourite employers
Save jobs to your shortlist
Receive personalised alerts
Access our live webinars
Register now
Get relevant job alerts
Gradcracker and Cookies
We use cookies to ensure that we give you the best experience on our website.
If you continue we'll assume that you are happy to receive all cookies from Gradcracker.
Continue
Learn more