Zotefoams plc is the direct descendant of the company that in 1921 developed the world’s first hard and soft expanded rubber. It began with the work of an English engineer who had moved to the USA to work with the great inventor Thomas Edison.

Charles Marshall, born in Birmingham in 1860, developed an enduring interest in the production of the puncture-proof tyre while working with Edison. He was inspired by the work of three Austrian brothers, Hans, Fritz, and Herman Pfleumer, who had conceived the original concept of filling tyres with some form of expanded lightweight material, rather than air.

In 1921, Marshall, who by this time had devised and patented a process for making both hard and soft expanded rubber, formed a company called Onazote, based in North London, to exploit his discovery.

The original company was not a commercial success and by 1935 the Expanded Rubber Company as it was now known moved to Croydon, where in 1938 it was taken over by the St Helens Cable and Rubber Company.

Under its new ownership the company began to prosper, and in 1942, began to examine foaming man-made plastics rather than rubber. This resulted in the production of Formvar, an expanded vinyl with remarkable impact strength.

Although the company continued to foam rubber under the trade names Rubazote and Onazote, it was products such as Polyzote (expanded polystyrene), Plastazote® based on polyethylene, and Evazote®, a more rubber-like, resilient material, that were to form the foundation of the company’s enduring success.

By the late 1970s the company had been taken over by BP (British Petroleum), and was working round the clock to satisfy the global demand for its innovative products. And in 1981 the company was awarded the Prince Philip gold medal for Plastics in the Service of Man.

BP sold the company to the management team in 1992, and Zotefoams was established as an independent entity. The new company was immediately successful, and was floated on the London Stock Exchange in 1995.

In 2001 the company made a significant expansion into the USA forming Zotefoams Inc, a wholly-owned subsidiary of the parent company, based in a new purpose-built manufacturing facility in Kentucky, USA. And in 2002 the company completed a new HQ, manufacturing, and R&D operation in the UK.

Over the rest of the decade Zotefoams used its new facilities in the UK and USA to develop new high-performance foams from advanced engineering polymers. In 2004 the company launched ZOTEK® F30, a high performance foam made from PVDF, followed by ZOTEK® N, a lightweight foam based on polyamide-6 (Nylon 6), and T-TUBES® advanced insulation system for clean environment made from ZOTEK® F.

In the same year the company launched ZOTEK® NA30, a lighter Nylon foam, and in 2012 it announced ZOTEK® PEBA, a product designed specifically for the footwear industry.

As well as developing and manufacturing outstanding new products, the company continued to expand its global reach. In 2007 Zotefoams appointed its first distributor in Asia, and in 2013 entered a 50/50 joint venture with the Japanese INOAC Corporation to manufacture and sell AZOTE® polyolefin products in Asia and Australasia. 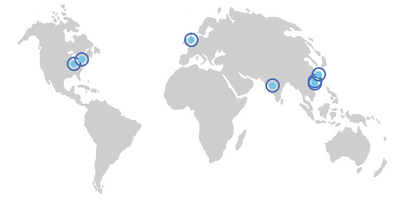 In 2015, building on the worldwide success of its T-TUBES® insulation products, the company created ZOTEK King Lai, a new joint venture with Chinese company, the King Lai Group, to manufacture and sell these technical insulation products, rebranding the product T-FIT® in 2016. Also in 2016, Zotefoams MidWest, based in Oklahoma, USA, was formed to supply specialist materials, based on AZOTE® foams, for the construction industry.

Today Zotefoams continues to develop and produce world-class foam products, while expanding its reach as an international organisation.