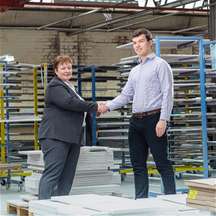 "I was looking for a role that would help me develop skills for a future career."

Standfirst: Sam Hill is a third year student at the University of Nottingham, studying an integrated masters in mechanical engineering. He was chosen to work as a WMG intern with kitchen manufacturer Burbidge & Son to identify productivity improvements in the firm's picking and packing process.

How did you find out about the WMG Internship?

I was looking for a summer job that would benefit me, but not just financially: I wanted a role that would allow me to develop and employ skills that I could use in a future career. I saw the position, applied in late May of 2019, and had an interview with WMG and Burbidge & Son at the Burbidge & Son factory in Coventry. I worked on the project over the summer of 2019 for a total of eight weeks.

Why were you chosen for the role?

The idea was to optimise the company’s production processes by implementing lean six sigma processes, which is an impossible ideal to achieve but helps a company strive for perfection. While I'm not an expert in this, I knew a lot of lean six sigma theory as lean manufacturing Professional Studies modules are part of my degree. I was also to conduct root cause analysis on sources of waste in the factory, and analytical skills are also an important part of my degree.

What challenge was Burbidge & Son facing?

Specifically they were looking at decreasing the time staff were taking to pick and pack kitchen furniture which the company had either manufactured themselves or bought in from another supplier.

How did you help?

There were around 30 staff in the factory and collecting data from them was key; so I designed some forms which they filled out every time a defect (in Six Sigma terms this is a product that is declared unfit for use, and which therefore requires scrapping or reworking) occurred. Studying these forms allowed me to measure defects, see which ones were occurring most often and suggest ways to mitigate them.

I was also looking at ways to increase productivity. A simple example: some stock was being stored on the other side of the warehouse for space reasons, so the obvious win was to make sure that it was moved when staff were already in that location doing something else. Plus, cardboard boxes were being stored in a way which meant they couldn't be scanned through easily like books on a bookshelf. I repacked them and divided them up into different categories so that items couldn't be put in the wrong place. To start off with it was about picking the low-hanging fruit to show how small changes could achieve big benefits.

Were you observing? Or working alongside people in the factory?

Both. To make a change that's going to stick you have to have data to prove that it will be beneficial and incontestable. That meant I had to roll up my sleeves and get stuck in sometimes. If staff didn't want to make the change, I did it with them to show that it would save them time and be more convenient.

What challenges did you face?

When you’ve been doing the one way for so long, it’s not difficult to see how disruptive a new way is. As a new intern with limited experience in their factory, I had to make sure I wasn’t stepping on toes. I managed to have a good working relationship with the team so they could tell me what they thought of my suggestions. That way, those with the most experience can be the ones reforming the processes and challenging the changes.

What was the impact of your work for Burbidge & Son?

I wrote an action plan including long-term ideas for process improvement, so that WMG can work closer with Burbidge & Son in future if required. I also estimated that changes carried out would amount to around a £2400 per annum saving in labour costs.

What was it like to work with Burbidge & Son?

Eventually being able to make big changes was really rewarding. It was a very enjoyable experience. I was also supported well by WMG with weekly meetings on the progress of the project.

What are you hoping to do after you graduate?

I'd like to get a job designing industrial machines — I'm particularly interested in CNC (computer numerical controlled) machines — which is why I was interested to work in a manufacturing environment.

What do you think you gained from the role personally and professionally?

It certainly improved my project management skills, and working with data was a good way to use my analytical skills. The nature of the job also required people skills in order to get the trust and support of the staff.

Plus, I had to make a powerpoint presentation in front of around 50 people from WMG and Burbidge & Son to highlight what I had done and the changes I had made. Things like that are always a bit nerve-wracking, but it was a good public-speaking experience! Over all, the internship has made me more employable.