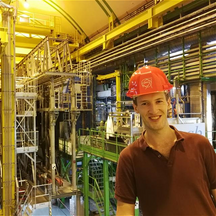 "I feel I’ve only just begun to start learning all the things that I can learn. Now that I have a taste of it, who knows how much left there is to discover? I want to find out!"

Roland was part of the panel on our Gradcracker and CERN webinar (originally broadcast on 28.01.2021) to watch the webinar click here.

Where did you go to university/what did you study?

I came to CERN for 3 months in 2018 while I was working at the Science and Technology Facilities Council (STFC) in the UK and was still a part of the Graduate scheme (which I found through Gradcracker!). Then, I returned to CERN as a Fellow (my current role) in 2019.

What made you choose to apply to CERN’s Fellowship programme?

When I came to CERN in 2018, I remember having the most fun I’d ever had at work – everyone was at the top of their league, the work was super interesting, and the area was amazing (there aren’t many places in the world that you can work in world-leading science and be 10 minutes away from a ski-slope!). STFC was an incredible place to work, but I felt better suited to the work at CERN and knew I would find my true challenge there.

I am leading the development of a number of sections of the new Beam Interlocks System for all the accelerators at CERN.

As part of the development, I am designing several crucial circuits including an Interlocks Manager Control Board that monitors and controls all interlocking information and provides diagnostics on all of the interlocking data. As well as designing the circuitry, I’m also writing all the firmware that controls all the on-board processors, as well as testing, evaluating, commissioning, and installing these systems.

What was it like relocating to Switzerland to join CERN? What help are you given by CERN?

For my Fellowship, I was offered relocation support by means of lump sum to assist with moving costs etc.;

This was incredibly useful for things like getting a deposit on a flat, buying a car etc. which would have been extremely difficult without the installation entitlement. So, in that sense, the only real barrier in setting myself up over here was the ever present language barrier (my French was pretty bad when I first arrived), but at least I had the peace of mind that I had support from CERN to help me settle. Not only is there a wealth of information on the CERN pages on the processes of moving (as well as all the excellent people in HR who are always able to give a helping hand), but there are also several Facebook pages dedicated to young starters at CERN, which act like a forum for anybody who has any questions relating to CERN, housing, internet and so on – the vast majority of its members are currently at CERN, and so more than likely there will be many people who have experienced your problem first hand, and can give useful advice. Moving abroad seems like a daunting prospect, but I don’t think my experience could have been made any easier, owing to all the super helpful advice and support given by CERN and its people!

What are your career highlights so far?

Career highlights, particularly in my field, are slightly difficult to convey as my target audience are quite niche – personal successes rarely please anyone outside of a few scientists!

I think as a real highlight, by the end of my time at CERN (or rather this contract) I will have designed something that will play a major part in the continuous safe running of CERN until the projected end of the LHC, in some 15 years’ time. Designing something so important that will have such an impact on CERN; I think that’s a lifetime achievement right there.

Perhaps as a more tangible success, I’ve completed all the work required to apply for Chartered Engineer status with the IET and will hopefully soon be able to add the letters ‘CEng’ to my name!

What happens at the end of the fellowship/studentship – will you hope to stay on at/return to CERN?

At the end of the Fellowship scheme, people are normally encouraged to return to their host states to apply the skills they’ve learned at CERN back home. As much as I miss the UK, I still feel like I have unfinished business at CERN, so I hope to pursue a (more permanent) staff position which will allow me to explore more of the opportunities here.

As Ray said “You need to be prepared to be a ‘lifelong learner’ here”; I feel I’ve only just begun to start learning all the things that I can learn. Now that I have a taste of it, who knows how much left there is to discover? I want to find out!