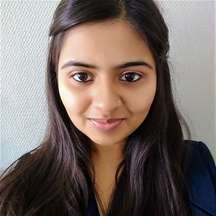 "I hope to stay at CERN and have made my fourth application here for the junior fellowship programme."

Heeral was part of the panel on our Gradcracker and CERN webinar (originally broadcast on 28.01.2021) to watch the webinar click here.

I joined CERN as a technical student on the 2nd of March 2020.

"If at first you don't succeed, try again!"

An insight into CERN's recruitment process, and some top tips from CERN's recruiter, students and graduates. To watch the full Gradcracker/CERN webinar, click here.

What made you choose to apply to CERN’s Technical studentship?

I have always been intrigued by CERN, ever since I first saw the LHC in the newspaper as a 10-year-old girl. The thing that gravitated me towards CERN the most was the ongoing nature of research and engineering in pursuit to answer questions on the nature of our universe.

Working at CERN was an amazing opportunity for me, as it helped me find a balance between my bachelor's in mechanical engineering and my master's in space technology. Space instrumentation and beam instrumentation have several things in common, the only difference being the location of their operation (one operates in particle accelerators and the other in space).

Being a research organisation, CERN offers you an experience somewhere in between research-oriented roles and industry. For a student finishing their studies, a technical studentship at CERN is a wonderful transition into practical learning.

Having applied for both the summer student internship and technical studentship once before, I received an acceptance on my third time applying to CERN.

My current role is that of a Mechanical Design Engineer in the Mechanics and Logistics group of the Beam Instrumentation section within the Beams Department. As a technical student, I spent the first 6 months of my contract developing and finishing my master thesis on the "Design and Development of the Beam Position Monitor Calibration Test Bench".

Beam Position Monitors or BPMs are one of the beam diagnostic instruments installed in particle accelerators that measure beam position – an essential parameter in beam physics. My specific roles were that of a Design Engineer, designing all the components of the test bench, but also of a Project Manager, handling the requirements analysis, solution feasibility study and developing the project outline.

During these 6 months, I also worked with the new Beam Gas Curtain (BGC) Collaboration on the procurement of the highly specialised, Ultra-High-Vacuum Metal Bellows. Having successfully completed my thesis, my role as a Design Engineer became more diverse as I had the opportunity to interact with other members of the group on their projects and find myself mini projects.

This helped me gain an understanding of the different projects that the group works on and on the nature of the work undertaken by team members. Through this, I learnt about the Beam Observation Television Monitors (a TV to observe the beam) and the variation in their engineering design as per the requirements of different kinds of particle accelerators. I also observed and learnt from their alignment on the test bench in the lab and later in the particle accelerator.

My work on the BPM test bench and with the BGC collaboration is ongoing. The best part about the studentship in this aspect is that you can learn from doing. You might be assigned a specific task to do but you end up knowing about much more than that, from all the things that happen around you. Even the installation of a specific instrument in the tunnel allows you to learn and observe so many other instruments in the area, which leave you awestruck and always learning more.

What was it like relocating to Switzerland to join CERN? What help are you given by CERN?

The CERN administration is quick and highly responsive. Relocating to the area was not a problem for me at all (unlike my other colleagues). I received a reply to my emails just within a few hours with clear instructions. In case I failed to understand anything, I would always find help. From handling the documentation for the university to accessing contacts of people renting houses on the CERN Marketplace, the responsiveness of the admin team made it very easy to plan the trip and stay in the CERN area. As far as the area is concerned, it is a mixed culture of people coming in from different kinds of places, making the energy of the CERN area vibrant, versatile and truly international.

What has been your career highlight at CERN?

My career has only just started but under the technical studentship at CERN, I wrote my master thesis, which was well received, with the highest grade from both my universities.

What happens at the end of the fellowship/studentship – will you stay on at CERN?

At the end of the contract at CERN, you have to finish the departure formalities, return resources used during the contract and head on to the next opportunity. Students are also encouraged to document their work along the way as it helps in the development of the future scope of work under your study.

I hope to stay at CERN and have made my fourth application here for the junior fellowship programme.

In any case, I shall continue to progress in my career and hope to come back, whenever that may be.