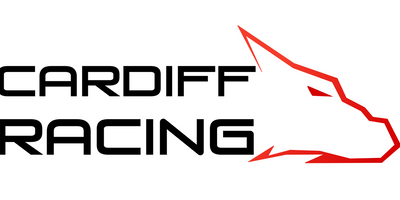 Cardiff Racing is a Formula Student team made up principally of engineering students at Cardiff University. Every year the team designs and builds a single-seater race car to enter into the IMechE Formula Student competition, as well as regularly participating in similar competitions across Europe.

The team is also heavily involved in local outreach and engagement activities, supporting local charities and engaging in events to promote STEM across the South Wales area. Cardiff Racing consists of both fourth-year engineering students participating in projects related to the car and volunteers from across all disciplines and years of study. 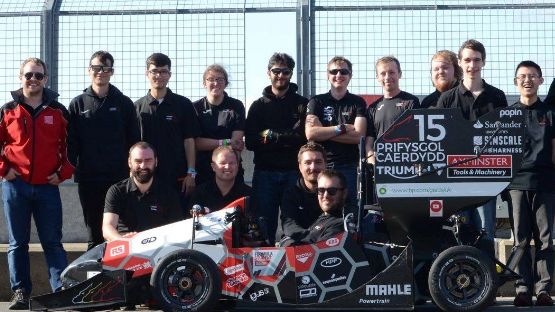 To find out more about our society please visit:
www.cardiffracing.co.uk/about

Many team alumni have become highly successful employees throughout engineering and other fields, crediting their experience with Cardiff Racing as a key advantage.
The team welcomes students from all disciplines, promoting knowledge transfer between years of study through inclusivity.
The first formula student team on Gradcracker!
Cardiff Racing is now in its second year of development of autonomous vehicle technology, looking to adopt this development on future on electric cars.

A short video showing Cardiff Racing car CR13 on some flying laps in the 2017 Formula Student Czech Republic event, showing the typical performance of the cars.

Cardiff Racing aims its efforts at the Formula Student UK event that attracts over 2000 students at Silverstone Circuit. Within these few days, the cars (and teams) are put through their paces and tested to their limit to find the best overall package of acceleration, handling, design, and reliability and economy. The static events are judged on cost of the car, presentation and design. The dynamic events consist of a figure of eight skid pan trial, acceleration and sprint events, and finally the endurance event.

We are typically a team of 40 who survive primarily on sponsorships yet consistently fight above our class – typically placing in the top five UK teams.

The 2019-20 season proved to be a bit different to what we were expecting due to the emergence of the global pandemic; however the team persevered to achieve as much as possible during this time, despite not being able to build a car. 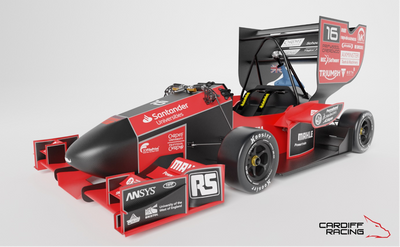 CR16 was designed from scratch, focussing on solving a lot of the issues experienced with the previous Cardiff Racing challenger CR15, especially around reliability and maintenance. A new chassis concept was adopted, offering improved access while striking a good balance between performance and ease of manufacture. New Hoosier tyres were introduced, promising a big upturn in performance due to the increased grip, but requiring a re-design of several key components to deal with the increased loadings. The aerodynamics package had a significant update, with the addition of a diffuser and rear wing DRS, as well as a strengthened and more complex front wing. A new additive manufactured sump was also designed, including movable baffles to prevent oil starvation.

However, it was not to be. With the workshop shut down in the Spring, and the planned competitions in the summer cancelled, the team pivoted their focus to the virtual events being hosted by the IMechE (FSUK), and a joint team from Formula Student Netherlands and East (FS Online). These two virtual events offered the team a lot of experience in presenting and justifying designs, and through the use of sim racing, a chance to compete in the driving aspects as well.

The team adjusted well to the new way of working, producing over 2 hours of presentations detailing every feature, process and design decision on the car for both competitions, as well as answering detailed Q&A sessions from the judges. They presented a cost and manufacturing breakdown of the car, showing the decisions made of cost vs performance and the processes they had selected for construction. A business case for the car was also outlined, showing how a prototype race car could be sold to a wider audience while delivering value to stakeholders.

There were also several virtual dynamic events undertaken by the team, from virtual sim racing to car tuning challenges, allowing the team to show off their experience and skills in these areas, while competing against teams from around the world.

Overall, the team was pleased with the results achieved: 20th place in the UK Statics and 4th place in the dynamics, including a win in the virtual skidpad as well as 10th place overall in FS Online.

Design work is currently underway for the car for the 2020-21 season, CR17, the hope being that it can compete for real in the summer of 2021. 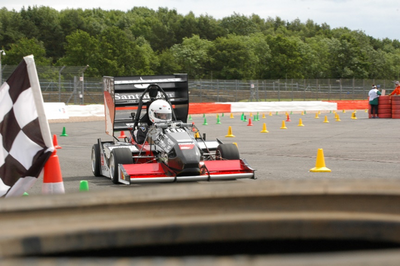 2017 was a historic year for Cardiff Racing. Big changes were afoot within Cardiff Racing, with the retirement of the Aprilia SXV in favour of a new Triumph Street Triple engine (bringing with it improved reliability and more power); a change in fuel from gasoline to E85, and a greater emphasis on aerodynamics than had been seen on any of Cardiff Racing’s previous cars. The monocoque was refined to improve front-end ground clearance, while the spaceframe had to be totally redesigned to accommodate the brand-new, larger engine. Suspension was not left out of the overhaul, with all-new geometries and a rear heave spring to control movement of the increased mass.

With all this development and many months of design, building and testing, the new car CR13 made its way to Silverstone for the 2017 Formula Student UK event and, with the team performing excellently in all the static events, dynamics began with continued success. More good results followed before lunch on Saturday when Autocross began. The car performed beautifully, producing a series of very fast times and setting the fastest lap of the competition at the hands of our very own Fast Welshman.

After a restless night, Sunday dawned and Endurance was upon us. Thanks to the spectacular showing in the Autocross, CR13 would be last on track, and it was making for a fascinating competition with numerous teams still in contention for the overall win. Both Cardiff drivers drove without incidence and finished the Endurance with an overall time of 28 minutes and 36 seconds. Then came the waiting; final competition results were to be announced in the evening. Every member of Cardiff Racing, past and current, was on the edge of their seats watching the livestreams, and then it was official. Cardiff Racing had won! This made the team the first UK team to win the Formula Student UK event, with all 19 previous competitions having been won by teams from elsewhere in the world.

This success marked a tremendous achievement in the history of Cardiff Racing, and was widely recognised (such as in this article from ITV Wales). It gave the team a platform to further its work in the Formula Student sphere, being invited to join 1998 competition winners from the University of Texas at Arlington in an event celebrating 20 years of the Formula Student UK event at the 2018 British Grand Prix, and skyrocketing the team’s recognition worldwide. It provided a strong foundation for the team’s development going forward, attracting new sponsors, and providing a new motivation that continues to drive the team to emulate this success in 2021.

If you are interested in joining our society or seeing our exciting work you can visit our website or email us.