Manchester Stinger Motorsports Society is first and foremost a way to apply theoretical knowledge to real world applications. Each year, as a team, we design and build a single-seater car that we then race in the FSUK competition organised by the IMechE and held at Silverstone.

The winning team is not solely based on the best car (dynamic events), but also on static events, which include costing, business, and engineering design which are judged by professional engineers from world-leading companies. This helps us develop into fully fledged engineers with skills prominently used in industry such as public speaking, project management, collaboration and much more.

The team is comprised of passionate and diverse people always willing to give the project their best. Unlike most other Formula Student teams, we take on students from all academic years and degree programmes at The University of Manchester. We always strive to maintain a fun working environment with inclusion, equality and diversity close to our hearts in everything we do. To find out more about our society please visit:
formulastudentuom.com/

We recruit from all disciplines and years as we believe everyone can add value to the team in one way or other.
We promote STEM to children and try to encourage women into engineering through various events such as Science X.
We are currently designing our first aerodynamics package.
We have a brand-new FS-AI team undertaking new challenges this year.
A fully powered electric car is in the works to be entered into competition in the next few years. We are participating in the FSUK 2021 event, which will hopefully be held at Silverstone.

The mission is a top 20 finish at the FSUK event for Class 1 and to enter a fully designed rolling chassis for Class 2. We also promote STEM in attending events such as Science X, where we present our car and team to encourage children and especially women into engineering.

We had a karting event in November 2018 to welcome new recruits. We also do karting events to preselect people to choose our driver for the next competition. We also participated in the FSUK 2020 Virtual Dynamics Event and placed 16th out of 34 entries with a 2nd place in the sprint event and an 8th place in endurance finals. Formula Student (FSUK) started in 1998 as a Demo Event at MIRA. It is part of a global competition series with more than 1000 teams worldwide: 10 competitions are recognised as part of the formula Student and Formula SAE competition series.

We have entered Formula SAE Italy in 2017 however, our main competition is Formula Student UK aka Silverstone! This has grown to have annually ~100 cars (Class 1) plus ~30 design only (Class 2) entrants from Universities from all around the world.
Typically engages 4000 students/year and has engaged over 40,000 students over the last 21 years.

Class 1 will participate in all 3 events whereas Class 2 is purely static events – they have no physical car to race after all. Before any performance or Endurance events can be attempted the car must pass extensive scrutineering.

A breakdown of the events are as follows: 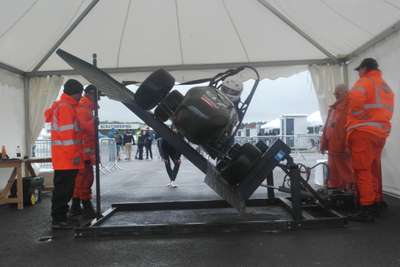 We attended the FSUK 2019 competition organised by the IMechE. We finished 36th/81, which was our 2nd best result ever. If you would like to find out more, please email us at manchesterfs@gmail.com and take a look at our website.