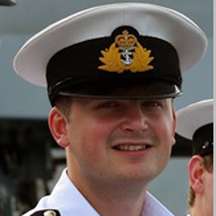 "The RN has given me some of the best professional training in the world, taken me to 5 continents and provided the opportunity to play sport and do Adventurous Training in some amazing countries."

I joined Welbeck Defence Sixth Form College where I did my A-Levels, played a lot of sport and reached a national semi-final in rugby having gone on a 2 week rugby tour to Canada. I also learned various military skills including: sailing, navigation, mountaineering field-craft. I studied Mechanical Engineering at Aston University, and was a member of the Defence Technical Undergraduate Scheme.

In September 2013, I began my Initial Officer Training at Britannia Royal Naval College Dartmouth, which focussed on three stages of training; Militarisation, Marinisation and Initial Sea Time. I passed out in May 2014 and studied the Systems Engineering Management Course (SEMC) at HMS SULTAN. This included studying the systems and machinery on board warships including understanding diesel generators, refrigeration plants, sewage systems, gas turbines and stability.

On completion of this training, I joined HMS LANCASTER, a Type 23 Frigate as the Assistant Marine Engineer Officer. During my time on board I gained qualifications as a ME watchkeeper from the most junior to most senior positions. This was a really intense part the professional training and the most challenging but equally the most rewarding. Whilst on board I deployed overseas spending over 5 months visiting areas in Europe, the Caribbean, USA, South America and the Falkland Islands before flying home from Cape Town, South Africa.

I then joined HMS PORTLAND, another Type 23 Frigate in October 2015 where I currently hold the position as the Deputy Marine Engineer Officer (DMEO).  Since joining, the ship has completed two maintenance periods, an intensive sea training package and has recently sailed to conduct a 9 month deployment. I am second in command of a team of 40 engineers providing operational capability to Command by maintaining all of the ship’s propulsion and power generation systems. I’m now working towards becoming ‘charge qualified’ which will make me eligible for the position of the head of the Marine Engineering department, on board any UK warship.

Since joining the RN, I have been given some of the best professional training in the world and worked alongside highly professional and skilled engineers. I have had the opportunity to work alongside foreign navies and travelled to 5 Continents. I’ve also played sport to a high level all over the world and taken part lots of Adventurous Training, such as skiing, scuba diving, sky diving and sailing. The best part is the ‘work hard, play hard’ ethos and I’ve thoroughly enjoyed my time in the RN so far.

"Still only in my mid-twenties, the Royal Navy has already provided me with a huge array..."

"It was only the Royal Navy that could offer a fascinating opportunity to work with..."

"I have loved the rich mix of each of my jobs to date and, no matter how busy, have..."

"Many of the tasks I am required to complete are very reactive and may include a whole..."

"Running my own Unit of 50 personnel is a great privilege and responsibility. It is..."

"I love the job variety that comes with working in the Royal Navy"
Meet more of our employees »
Download it and follow us.
You'll be the first to know.
LATEST
LOOKING FOR A PLACEMENT WITH A DIFFERENCE? a 12 month technical placement with CGI will help put your theoretical knowledge in to practice CAN YOU IMAGINE... taking part in the largest scientific experiments in the world? CERN is looking for physicists and engineering graduates PUT YOUR TALENT TO THE TEST join the BAE systems team and help deliver cutting-edge technology that really counts NO EXPERIENCE REQUIRED TPP is looking for problem solvers to help them tackle the world of healthcare CLOSING SOON join Balfour Beatty, one of the country’s largest infrastructure groups. Apply before it's too late!
Get discipline relevant job alerts