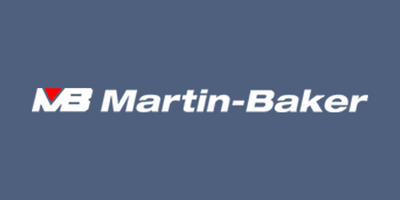 At Martin-Baker, we run an exclusive club that unifies all pilots whose lives we’ve helped save: life membership of the Ejection Tie Club is confined solely to those who have emergency ejected from an aircraft using a Martin-Baker ejection seat, which has thereby saved their life.

The first pilot to be accepted into the Club was an RAF serviceman who ejected over what was then Rhodesia in January 1957. Since then, the Club has over 6,000 registered members. 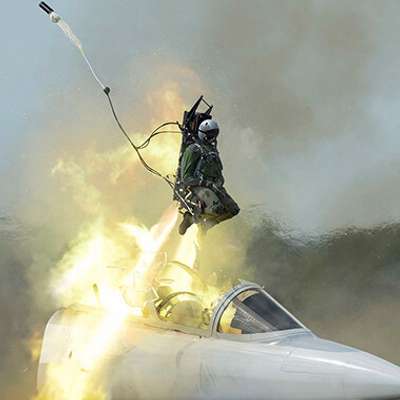 The primary objective of the Club is to provide a distinctive tie to be worn with civilian clothing which provides a visible sign of the members' common bond. Every Club member is given a certificate, membership card, patch, tie, pin or a brooch for the women. All Tie Club memorabilia depicts a red triangle warning sign, the recognised international danger symbol for an ejection seat.

The Ejection Tie Club was founded by Sir James Martin and is now run by Andrew Martin, the grandson of Sir James.

3rd May 1983 was an interesting day. The Harrier Force was deployed in the field for TACEVAL. On our first launch, just as I was nozzling aft, the engine noise stopped, most warning lights came on and when the view out the front changed from blue sky to green field I ejected. It was estimated that I pulled the handle at 180 feet. Certainly the parachute descent did not last long. I was lying in a field of young corn wondering what had happened when I heard a tracked armoured vehicle coming towards me at speed. I decided to show myself to the oncoming RAF Regiment crew before they ran me over. An injured knee ligament, sack of potatoes landing, kept me off flying for three months but hey I was alive thanks to Martin Baker. I still have the letter I got from D J Burrell, Managing Director telling me, among other things, that mine was the 5046th such escape.

The photo shows my arrival back at RAF Gutersloh in a tracksuit given me by RAF Hospital Wegberg after they had taken all my flying clothing for examination. The BoI lasted some time as, because we were on TACEVAL, I was carrying a sheet of classified code which disappeared from my knee pad during the ejection. The champagne tasted good! It was a sunny day in Cyprus and I was in Akrotiri as part of the 29 Sqn detachment from Wattisham. On the 8th of July 1971, I was an IWI (Interceptor Weapon Instructor) on single-seat Lightnings and training a young pilot in Air-to-Air Combat. The first flight was fine and we were in the air again very soon and this time I was showing him how to escape from a low speed fight by rolling back to level, full reheat of both engines and push the aircraft “G” to zero as the Lightning will get high speed very quickly. That didn’t quite work, as after a few seconds of doing this I heard a “Whoomph” and then the Reheat 1 – (FIRE) warning came up. Time for training to stop and turn for home!

We turned for base (Akrotiri) but the Reheat 1 was still on, my No. 2 told me that smoke was coming from the Engine/Reheat 1 and I could feel resistance in the controls. Then, very soon, the Reheat 2 (FIRE) warning came up. With a Double Fire Warning the rules are easy: fly to a safe area and bail out! As I was just over 13,000 ft, 35 nm from base – time to go! I sent my last Mayday and ejected.

As the seat fired, my head dropped down slightly and I felt tumbling and spinning, however, that subsided quickly. Shortly after that I felt a violent deceleration, the seat fell away and the main parachute deployed leaving me swinging gently. I could see the blue and warm Med but I had problems taking off my oxygen mask which would not leave me and my (new!) Mk. 14 life jacket would not open for a long time.

Soon I was in the Med, I left the parachute, and got into the dingy and about 15 – 20 mins later the rescue helicopter picked me up and flew me to the Akrotiri hospital. On the attached you can see the photo of the helicopter and it’s crew and a very wet (but happy) Graham Clarke. Thank you Martin-Baker for your superior craftsmanship and commitment to excellence, without it I would not be here today to tell my story. On May 10th 2019 I was flying my 6th training sortie in a T-45 Goshawk out of Kingsville TX. Shortly after take off, we experienced an engine failure in IMC conditions. With no other options and rapidly approaching the edge of the ejection envelope, we pulled the handle. The seat worked as advertised saving both myself and the instructors life.

We both went on to continue flying and become great friends. I was able to earn my wings of gold a short year after, all thanks to Martin-Baker. Thank you for saving my life and giving me the opportunity to achieve my dream of becoming a Naval Aviator.

Forty years ago I ejected from a Royal Air Force Hawk T1 during a display by the Red Arrows Aerobatic Team along the seafront at Brighton. The anniversary of this event on the 17th of May caused me to reflect on the debt of gratitude I owe Martin-Baker. Four decades of all that life has to offer, from watching children grow up and then have children of their own, to shortly celebrating a golden wedding anniversary of my own, and everything in between centred around a full career in military and civil aviation. The details of that day in 1980 are still clear. Whilst performing one of the opposition manoeuvres as part of the ‘synchro’ pair I was flying at 250kts 40′ above the sea towards my opposite number. Shortly before we crossed there was a loud noise accompanied by a jolt and the aircraft immediately began a rapid uncommanded roll to the right.

My starboard wing tip had collided with the top of a yacht’s mast removing both a section of the wing and a portion of the aileron. The low altitude and ineffectual control inputs triggered my decision seconds later to eject, by which time the aircraft was almost inverted and about 300ft above the sea. his was the RAF’s first use of the Martin-Baker Mk10 rocket assisted seat and everything worked quickly and faultlessly, so that I entered the water shortly afterwards with the GQ Aeroconical parachute in it’s initial stage of opening. Having inflated my life saving jacket I was swiftly rescued by a nearby craft and taken ashore. My only injuries were slight facial scratches caused by MDC splatter, but significantly absolutely no spinal compression injuries which had often been associated with previous ejections.

Forty years ago I wrote a grateful letter of thanks to Martin-Baker to which Sir James Martin himself graciously replied. I do the same today in the certain knowledge that in another 40 years someone else will be writing to thank all of you at Martin-Baker, past, present and to come, for the outstanding contribution you all make to aircraft escape systems. As a very satisfied customer I say wholeheartedly, ‘Your seat saved my life’. I ejected from an RAF Harrier GR3 serial XW916 on 17 June 1986. I’d had a generator failure and was about to land at RNAS Yeovilton, but seconds before landing the engine failed for a completely unconnected reason leaving me no choice but to eject. It all seemed to happen in slow motion, to this day I can clearly remember every detail, including the smell of the explosive detonation and the jet disappearing below me before releasing my dinghy and relaxing totally for the impact like we were trained.. They say I had a 0.6 second parachute ride, but thanks to your wonderful system I escaped unhurt and am still flying 34 years later.

It was the day after I got engaged; Vicky and I got married soon after, our 3 children and a grandson would not be here but for Martin-Baker – Thank you so much!

“Who would think that the act of pulling down a blind could prolong ones’ life by 53 years, and counting? This simple action was taken at the end of a training sortie in a Javelin Mk 5 on 9th March 1960, when the aircraft suffered complete electrical failure above cloud.

I eventually descended through a hole but, once in contact with the ground and being almost out of fuel, was unable to find a suitable place to land. Your marvellous seats gave my R.O (Sgt Bob Lydall) and me the only chance of survival. Needless to say they worked to perfection. Thank you Martin-Baker for your fantastic contribution to Aircrew Safety. My wife, family and friends endorse this praise wholeheartedly. Gratefully, Mike Gill”

This is just a handful of the amazing 'Ejection Stories' but if you'd like to read more you can do so here - https://martin-baker.com/ejection-tie-club/