Added: Over a year ago by Leonardo 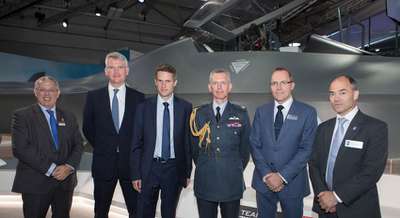 Standing alongside the Secretary of State and Chief of Air Staff were the senior management of the RAF Rapid Capability Office, BAE Systems, Rolls Royce, MBDA and Leonardo, who together as Team Tempest signed a contract to provide the technologies, knowledge, skills and expertise to develop a Next Generation Combat Air System capable of operating in the 2040+ environment.

The contract forms part of the ongoing Future Combat Air System Technology Initiative (FCAS TI) programme and will see Leonardo develop the Sensor and Communications Systems technology for the next generation aircraft.

ENSURING THE FUTURE OF UK AEROSPACE

Leonardo has been actively involved with the UK Government on various activities to assess the importance of the UK defence sector to UK prosperity and its role in projecting the UK's influence around the world. As part of this activity, Leonardo has supported governmental work to highlight the importance of the aerospace sector to the UK, with a particular emphasis on retention of skills, knowledge and expertise.

The company has been working with the UK Ministry of Defence on the FCAS programme since 2012, and on its predecessor FOAS, developing concepts for the next generation of Sensor and Communications technology. As part of the UK Combat Air Strategy, it will ensure that the UK maintains the technological competence necessary to retain military freedom of action. Team Tempest will mature a broad range of technology areas and concepts relevant to a Future Combat Air System; including open mission systems architecture; sensor systems and effectors, power and propulsion and airframe technologies.

Developing world-unique capabilities, establishing mutually beneficial partnerships in targeted technical areas, and lowering barriers to collaboration will allow the UK to be in a favourable position for a Next Generation Future Fighter acquisition programme. Aligned to the Combat Air Strategy work, UK Ministry of Defence Head Office will develop potential future acquisition partnerships. Team Tempest will also identify and support the initiation of targeted technical cooperation with governments and industries of these partners where this is of mutual benefit for the parties.

Leonardo will mature the critical technologies to deliver next generation sensing and communications alongside the advanced open-system architectures that will deliver a step-change in how the sensors are employed within an operational system. It will mature the requisite technologies through a systematic approach to feasibility studies, lab tests and rig tests. 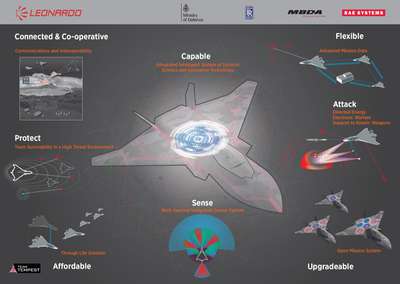 Key capabilities planned to be demonstrated include: integrated sensing and defensive aids architectures and information fusion; advanced Electro-Optic/Infra-Red sensor technologies; advanced Multi-Function Radar Frequency sensor technologies; all-aspect broadband Electronic Warfare capabilities; and robust high bandwidth communications. These activities will culminate in the integration of hardware, software and enabling architectures onto a flying test-bed aircraft, providing a clear demonstration of UK leadership and facilitating further development tests on the path to a Next Generation system. With such a broad range of technology developments over the next decade, followed by a full scale Team Tempest development programme, Leonardo will be looking to attract and develop the next generation of world leading suitably qualified and experienced personnel (SQEP) for our business.

What a day at work! Young engineers hitch ride on Royal Navy helicopter

Keeping the wheels of industry turning

Focus on the Children's Air Ambulance
Read more of our blogs »
Download it and follow us.
You'll be the first to know.
LATEST
ACCEPTING ALL STEM Cummins has a brand new undergraduate role - components service engineering placement. Take a look! HELP IMPROVE LIVES ACROSS THE WORLD TPP'S graduate jobs are open to all STEM disciplines. Want to get involved? Apply now DO SOMETHING THAT MATTERS P&G, the world's largest consumer goods company is looking for forward-thinkers. Find out more BECOME A GAME CHANGER nucleargraduates is inviting open-minded grads like YOU to help lead the future of the nuclear industry GROW WITH TGW GROUP If you are searching for a job with excellent career opportunities, TGW is the right place for you! A JOB YOU LOVE TO TALK ABOUT Sky has 9 roles based in Osterley, Brentwood or Leeds - closing April 30th. Apply today LOOKING FOR A PLACEMENT WITH A DIFFERENCE? CGI has news. They're looking for a technical intern to complete a 12 month placement
Get discipline relevant job alerts